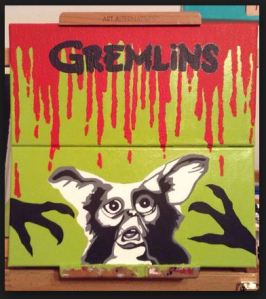 Is it only me? Or have others noticed how an artist can undergo a complete personality change in an instant like Dr.Jekyll and Mr. Hyde especially when it comes to sharing gallery space for a group exhibition! Competition is good, and it is necessary not only for art to be sustained but also for it to grow and to evolve.

It is to the artists who were brave enough to charter new territories, break the rules and challenge the ideals of society that honour has been bestowed on over the centuries, sadly posthumously for the majority.

Vincent Van Gogh died pennilessly and didn’t sell a single painting during his lifetime. He contradicted the fashionable use of well blended and smooth colour by being one of the first artists to use the juxtapositioning of colours to create the optical illusion of mixed colour. His subject choice was often personal and confronting. The world wasn’t ready for that in the 1880’s.

Today it seems that the more contradictory and even disturbing art is the more we applaud it. Art appreciation is in the eye of the beholder

For every successful artist in history, there have been many, broken both in soul and in pocket that have fallen by the wayside. We get bored easily and tire of the over-familiar, yet we like to conform and accept change with difficulty. Fashion dictates Art.

The paintings that we swoon over today might be on sale at the local second-hand shop for a few dollars tomorrow. Only the work of artists who were the real masters of their ground-breaking methods has survived.At their first exhibition, The French Impressionists were ridiculed at the Salon in Paris. Artists hadn’t previously painted’ en Plein air’ but in their studios and had to mix their pigments. The French Impressionists revolutionised painting by painting outdoors and by using the oil paint that was available in ‘tubes’ for the first time and, therefore, portable. They were the first to rely on natural lighting and were known as “The Painters of Light” by their peers.

The ‘Drip’ effect seems to be a current favourite. Half of the painting has been beautifully painted in the artist’s personal style but on the other half rivulets of paint have been left to run freely down the canvas. It certainly creates an interesting effect.

Today competition is fierce among artists to break new ground, to make new discoveries and to be the first to use a ‘new’ technique and to be accepted by the fickle public. Inside every artist, there is a little Gremlin ready to fight for his moment of fame.

1 thought on “THE INNER ARTIST IS SOMETIMES A GREMLIN”

This site uses Akismet to reduce spam. Learn how your comment data is processed.